December 30, 2015December 30, 2015 • Laura Gibbs
I kept thinking about Aras's sociograms from the hangout today, and I realized that I had seen something similar, but done manually, for face-to-face classes: it's something called a Harkness table. So I'm writing this up to share with Aras in case it is new to him, and also just to share because it is pretty cool. I don't teach in a classroom anymore, but I think this would be a great experiment.

I learned about this because a friend of mine from graduate school, Julie Anderson, teaches at a school that uses Harkness tables, and she was in a video about that; it's from an Edutopia profile of the school: Collaborative Learning Leads to Student Success. Julie starts talking about the meaning of the Harkness table around 3:50 into the video:

Here's what one of the charts that shows the interactions around the table. It's a "discussion tracker," and there is more information about that here: Collaborative Learning Resources. One of the students has the task of making the map as their contribution to the discussion: 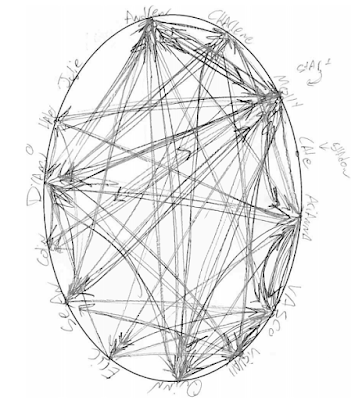 Isn't that cool? There is a Wikipedia article about Harkness tables too!
Skip to toolbar