December 14, 2015December 14, 2015 • Laura Gibbs
So, here's some info about my "Twitter Bootcamp" project for those of you participating in #HumanMOOC. I would be really glad to hear from #HumanMOOC participants about this project (see requests below), and I would also be really happy if this could be a useful resource for anyone in #HumanMOOC who has not been using Twitter who would like to give it a try. The Bootcamp materials are designed with a focus for my school (University of Oklahoma) and our upcoming Academic Tech Expo on January 15 (#OUTechExpo), but just substitute #HumanMOOC where I've got our OU hashtag, and voila: it's a #HumanMOOC Twitter Bootcamp.

I'm putting the materials at the blog we already have for our #OpenTeachingOU chats: Twitter Bootcamp. The Bootcamp consists of four "days" of activities leading up to our Expo on January 15, but the activities can be completed by anyone at any time; there's nothing synchronous about it at all. That's why I'm actually calling it "steps" instead of "day" — I don't want anybody to think they have to wait until January 11, and you can spend as much or as little time on the activities as suits your needs. The references you will see there to January 11-12-13-14 are just as a lead-in to our Tech Expo which takes place on January 15

FOUR STEPS. The idea is to walk people through some Twitter basics (Step 1 is done; I'm working on Step 2 now), then some Twitter tools and add-ons (Step 3... I'd love to learn about other tools people use; still tentative list), and then a Twitter project (Step 4); since we use D2L at my school, the Twitter project I'm going to focus on there is adding a Twitter widget to a D2L course homepage, although Twitter widgets can be adapted to all kinds of other uses (in other LMS, in blogs, websites, etc.).

With BUDDIES! Hopefully, the people publicizing our Expo will be publicizing the Bootcamp also (it's different than anything we've done for the Expo before, since it's totally asynchronous and in the open), and I'm also going to try to run a "Buddy" system too. For the Buddy idea, during the week of January 4, I'm going to contact the serious users of Twitter at my school (there really are not that many), and urge them to find one other person in their workgroup who is not actively using Twitter right now and offer to be their "buddy" while they are doing the Bootcamp activities. Of course, I am going to be a "buddy" to anybody working through the materials also, but I was thinking it would be really good to have a buddy who actually knows you, who shares your specific professional interests, etc.

#HumanMOOC Buddies too. Meanwhile, for #HumanMOOC, I am glad to be a Twitter buddy to anyone who wants to work through these activities during the #HumanMOOC event; since I am spending this winter break at home, not traveling, I'll probably do a good job of keeping up with the #HumanMOOC hashtag at Twitter.

DIIGO. I'm also working on collecting Twitter sources in a Diigo. My use of Diigo is kind of chaotic, but for this I am trying to be super-organized, so I plan to tag everything carefully and add descriptions. You can see what I have collected so far here: Diigo - Twitter.

HELP WANTED. I would really appreciate people's feedback:
* If you are new to Twitter and want to give the Bootcamp activities a try, that would be great; let me know what you think! You can comment on any of the blog posts or tweet me @OnlineCrsLady (or send me an email if you prefer: laurakgibbs@gmail.com).
* If you are a Twitter pro, let me know what strategies have made Twitter a success for you! I'd also be really grateful for ideas about what tools and add-ons to focus on; I'm not really that adventurous myself, so I'm relying to some extent here on what I see my friends online using successfully; my own use of Twitter is pretty mainstream.
* If you have Twitter resources to recommend that I can add to my Diigo Library, that would be fabulous: if you tweet those with the #HumanMOOC hashtag, that would work. So far I've been doing pretty well at keeping up with #HumanMOOC hashtag.

Okay, now I'm going to get to work on the Step 2 materials: my goal is to finish those today! :-) 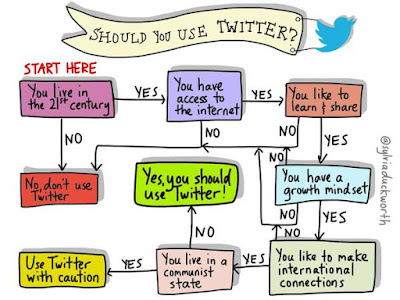 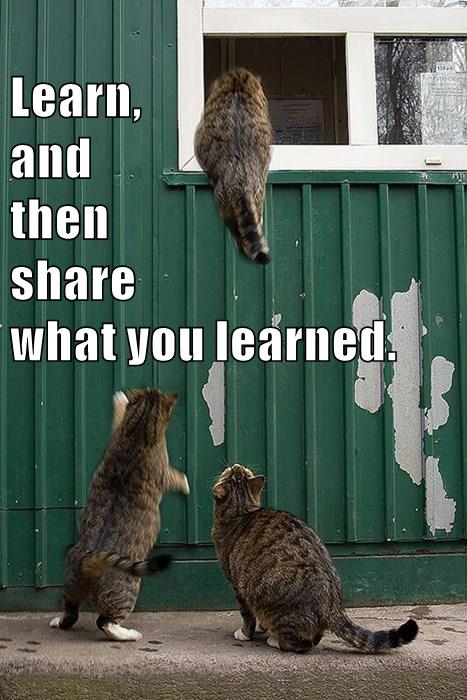 (Sylvia Duckworth and the Growth Mindset cats)
Skip to toolbar